I spent Christmas week of 2016 in Barcelona and it was a Christmas like no other. It was the first time I spent the holidays not surrounded by friends and family. Instead, I was surrounded by other travellers and backpackers from different continents who were just as curious about the world as I was.

Unlike the rest of Europe, it was sunny and warm in the day with the city bustling just like any other. At night, a little cooler and quieter, it’s only when you turned into a small street off La Rambla that the feistiness of Barcelona’s nightlife hits you. Even over Christmas, the Catalans were committed to long nights out, singing and dancing along to Spanish or Catalan songs I’ve never heard of.

Are you planning a trip to Barcelona this summer?

Here are some travel tips to help you save some money without compromising on the loveliness that is Barcelona. 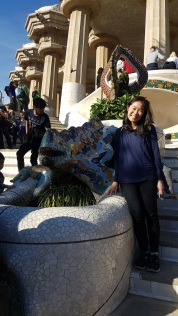 The famous lizard in Parc Guell 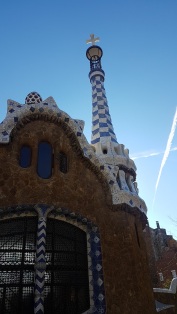 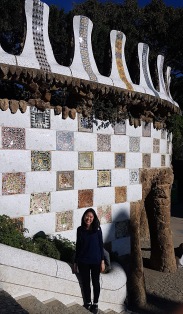 Other recommendations in Barcelona

Razzmatazz – This is a pretty dope club with a good mix of locals and backpackers. Yes, I use “dope” from time to time. Check out their facebook page for upcoming events and make sure to save the image of the poster on your phone. We got into the club for free with that.

Ovella Negra – Cheap and delicious Sangrias are served with free popcorn in this establishment. It’s packed out most nights because the atmosphere is great and the energy from young and happy (read: drunk) students is simply infectious. It’s trendy and fun and a great way to get a glimpse of what it’s like to live in Barcelona in your early 20s. I was probably the only backpacker there that night.

Hush Hush Cafe – I worked here a few times and absolutely loved it. Although it’s not a coworking space, there were enough plugs around, the WiFi was perfect and the music was on point – the perfect combo to get work done. In between writing sentences, I “people watched” the team working there who spoke French and Spanish fluently like it was the most natural thing ever. Their wines and beers were spectacular company too.

Barcelona’s underground city museum– If you’re a history buff or if you like old ruins, this is a pretty incredible site to behold. You can go on a tour where they let you walk through the ruins, passing old columns and passages; or you can do what I did and watch the free videos available and peer from the 1st floor down into the magic that was a floor below.

Espai Born – My last weekday in Barcelona was spent in this coworking space and it was lovely. Although coffee wasn’t provided (there’s a machine and you gotta bring your own pods), a stranger gave me one to fuel me up. In return, I offered him some chocolate I got from Lidl. Pro tip: Offering strangers chocolate was a great way to get to know them, a.k.a beautiful Spanish programmers and developers and graphic designers 😍 . A desk for the day cost around €15.

Stuff I wish I checked out

Parc de la Ciutadella – I was at the Arc de Triomf but didn’t make it all the way to the park and the zoo.

Flamenco show – As someone who loves the arts, dance and theatre, I should’ve gone for one of these shows. They felt too indulgent and expensive and so I decided to skip out on it.

Day trip to Girona – Sandemans Barcelona offered day trips to Girona but I couldn’t make it because I had to work.. you know that thing I do to fund my trips. Yes, that. Girona is home to Teatre-Museu Dali and it looked like my kind of wacky.

The inside of the Sagrada Familia – I saw this historical and present day wonder from the outside but never ventured into the building itself. A ticket seemed to cost more than I was willing to pay so I decided to skip it.

In Barcelona, I spent a lot of time alone. Nicole time was something I was craving for and to be alone in such a beautiful city felt like a luxury. On Christmas day, I ventured out towards the beach and sat down by the sea.

Tired from the night before, I sat on the sand chomping down on more churros than one person should have. It was a quiet day out and the beach was dotted with tourists and a few vendors. For a while I sat there, breathing and staring out into the sea, the open blue space before me.

Barcelona was once upon a time just a word in a plethora of words and names. But that day, Barcelona was real, it was tangible and I was a part of it.

12 replies to An honest travel guide to Barcelona