We decided to make a pitstop in Bratislava, between Budapest and Prague. The first thing that hit us as we got off the train was the chillier winds despite the sunshine.

We stayed in Hostel Blues for the night, which is probably the friendliest and most helpful hostel both of us have come across so far. They have free concerts and cooking classes on a weekly basis, which is a great way to meet other backpackers. I do applaud the hostel for taking the initiative to create such opportunities for their guests. Apart from that, they also have a really neat luggage storage room, with shelves for bags rather than piling them on top of one another like they do in some other place (I will not name drop here).

In such a short time, we decided to go for a free walking tour (but of course) before exploring the little gem that is Bratislava. They’re history and experience of Communism and Nazism is very similar to that of Hungary and Czech Republic, mostly because they used to be Czechoslovakia twice upon a time. I won’t bore you with all that history stuff, just know that there are two free walking tours each day, one at 11am and another at 4pm. Be sure to bring a jacket or coat, anything to keep you warm and dry.

Apart from the Old Town in Bratislava, there are a few other places worth checking out whilst you’re there. The Blue church/Smurf church/Cake church/Candy church/Cotton candy church or it’s actual name Church of Saint Elizabeth is something worth having a look at. It truly transports you to Disneyland and you almost expect Tinkerbell to fly over its towers.

Bratislava’s quirky side. They’ve got quite a few sculptures like these dotted around town with the sole aim of making people smile. This is the Man at Work.

A fancy corner of a building

A couple of creepy looking dolls casually hanging off a balcony. 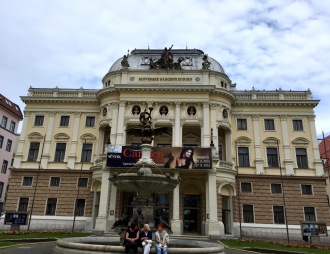 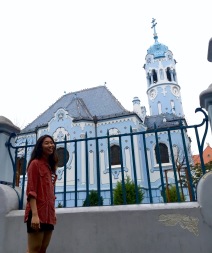 The blue church. Unlike other churches we’ve visited, this one only opens for mass. Also, I was freezing in my poor outfit choice.

After the tour, we decided to go for dinner at Bratislava Flagship Restaurant which was highly recommended by out guide. It was possible to get a meal and a beer for just under €5 if you ordered the right thing. We, however, ordered a weird mix of food which included the garlic soup served in a bread bowl, pork schnitzel (which is really a fried piece of breaded pork fillet), potato pancakes and wine. It was a combination that didn’t make sense whatsoever. Mainly because the Chinese menu translated pork schnitzel to fried ribs, which clearly sounds so much yummier. What I liked about this place was its no-frills-good-food sort of approach that clearly appealed to both locals and tourists.

The next morning, Sue Huey lugged my sorry butt up another hill, to the Soviet War Memorial in Slavin. It was a half an hour walk from the hostel and we got to go through the new part of town to get to it. It was nice to see the rest of Bratislava, apart from the Old Town which is the only thing that seems to grace the front pages of travel brochures. 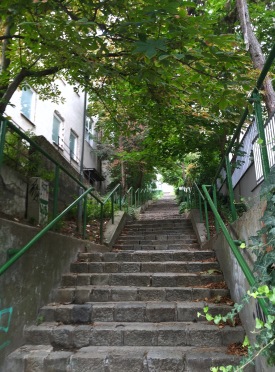 The first of many flights of stairs up to Slavin. 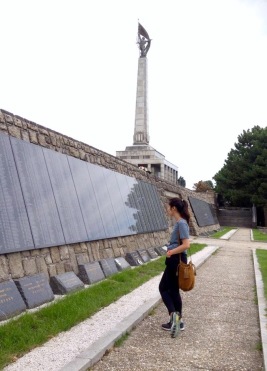 I was struck by how young some of these boys were. Did they know what they had given their lives up for?

Before leaving, we made a quick trip to a local supermarket since we couldn’t seem to find a local market in time. Does anyone else get as excited as I do about going to a supermarket in a different country? It always intrigues me how the layout of certain items are different (for example, in the Malaysian supermarkets, fruits and vegetables are always the first items you see, unlike in the UK where you’re first bombarded with quick meal deals and milk), the assortment of cheeses at the cheese counter, the cold meats on offer etc. We made a quick purchase of sandwiches and fruits and were on our way out of Bratislava’s train station within the hour.